There were email chains passed along that said that anyone who sold a home would be subject to this tax.

Which is absolutely true, except for the fact that it is complete fiction.

The rumors have long since been debunked, yet after the Supreme Court upheld the Affordable Health Care Act earlier this week, I’ve heard some conservatives once again pushing this narrative.

But just like Bloody Mary or death panels, it’s just another urban legend that just won’t go away.

So kids once more with feeling, “There is no real estate sales tax in Obamacare.”

Now there is an additional capital gains tax included in the Affordable Care Act, and yes it will affect a narrow field of real estate transactions.

But here is what you need to know; the majority of taxpayers will not have to pay it.

So here is the truth, plain and simple.

There is a new tax on investment income which will cover the income from interest, dividends, rents, as well as capital gains. It’s not a transfer tax on real estate sales.

While the sale of a home can be subject to this tax, it is only if a number of criteria are met.

If you are fortunate enough to be in that high income bracket, it does not automatically mean you will be paying this tax.

While all real estate transactions were once subject to a capital gains tax, President Clinton introduced an exemption to the tax for primary residences with a profit of $500,000.

The National Association of Realtors lays out several examples here, including a fictional couple who have a gross income of $325,000 and make a profit of $525,000 off the sale of their primary home.

Again we are talking about the profit you make off selling your home, not the price you sell it for.

Here is the NAR’s chart on “John and Mary”: 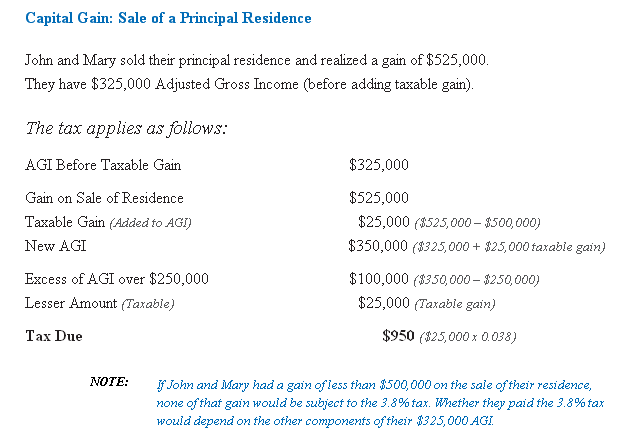 So there you have it. An additional $950 for a couple who made over a million dollars in income

The fact is even if you are in “John and Mary’s income bracket.” with the amount of homes that are currently underwater there is little chance of making that kind of profit, which means you likely won’t be paying this tax.

And did I mention this tax doesn’t kick in until January 1st, 2013?

So everyone relax, and don’t believe everything you read on the internet.

Unless it’s here of course (: